A couple of years ago the KIPRC took on the care for twenty orphans. These orphans are housed with church members and they have received education. To cover the costs for this programme, support has been given from the Netherlands over the past few years.

By now these orphans have finished school and have returned to the areas from which they came. They have received support in that transition for finding a job or starting a business.

One of the orphans, Dennis CheptoWillemy, wrote a touching letter in June 2014 on how he met Jared and what happened to him after that.

Here you can find the English text

All but two months later (10 August 2014) he and some other orphans were involved in an accident on a river. They were returning from an outreach project for which they also visited an orphanage. Two boats were hit by a huge wave and capsized. Many people died in that accident. Three orphans suffered severe injuries and were taken into intensive care. A week passed before the hospital staff realised the three patients knew Jared (and were asking for him!). Then the medical bill was presented to the KIPRC. Although the KIPRC didn’t have responsibility for the orphans anymore, the board still wanted to pay the bill for them. Not paying the bill would not help the medical treatment the orphans were receiving (to put it mildly!). From the Netherlands 1600 Euros was sent for the necessary care (mostly from the reformed Church in Houten). After a couple of weeks the orphans were discharged from the hospital.

Jared (l) with the chairmen of the school 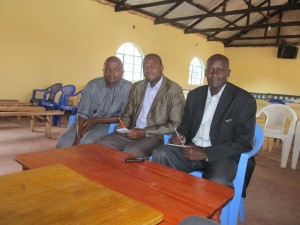 Financial support is (very) welcome. Together for Life is acknowledged by Dutch tax authorities as an ANBI (Algemeen Nut Beogende Instelling - translates roughly as: charitable institution working for the common good). Donations to ANBIs can be declared as tax deduction on income tax in the Netherlands. Account number (IBAN) is: NL91RABO0184195500 Many thanks!